Now, for the entree, this is a very simple paella but, quite tasty. Most paellas include chicken but we only had 2 hours in my class to make four recipes.

Saffron, while pricey, it’s worth it; it’s believed to stimulate sexual desire in women.
Garlic; the ancient Romans so believed in the love powers of garlic they consecrated it to the goddess of fertility, Ceres.
Shrimp provides iodine; an iodine deficiency can result in reduced sex drive. Shrimp protein breaks down in the body to the amino acid phenylalanine, proven to increase levels of sex drive-boosting neurotransmitters in the brain according to eatsomethingsexy.com. 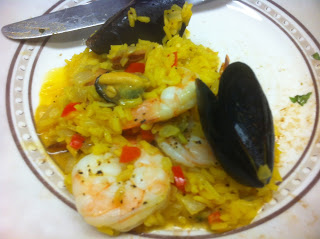 Preparations
Heat chicken stock over low heat and dissolve saffron in the stock. 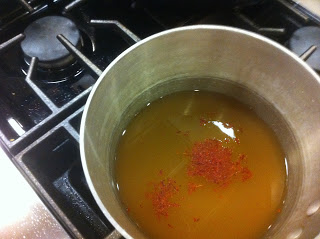 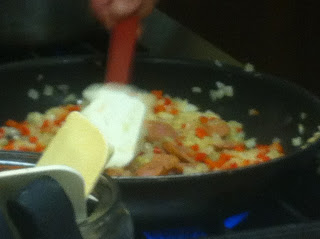 Add garlic and rice and cook for one minute, then add saffron stock, cover, and bring to a boil.  Reduce heat to simmer and cook for 15 minutes. 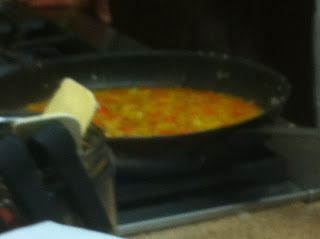 Stir rice, then lay shrimp and mussels on top of partially cooked rice, replace cover, and cook until rice has absorbed all the liquid, the shrimp are cooked, and the mussels have opened, about 5 minutes more. Discard any unopened mussels and sprinkle entire dish with parsley. Salt and pepper to taste and serve immediately. 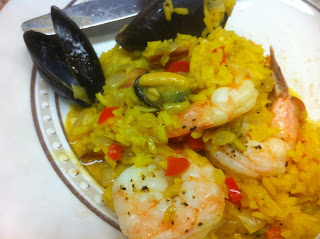 Food Made Fabulous is all things food! We are a food blog specializing in culinary arts, meal planning, recipe sharing, entertaining, and event planning as well as sharing experiences and recommendations to get people back into the kitchen, eating healthier and entertaining fabulously! It is designed to encourage families back to the dinner table by providing busy families with recipes, meal plans, cooking tips, and entertaining ideas. We are dedicated to promoting more cooking in the kitchen and entertaining in the home. We will provide entertaining suggestions for all occasions. We don’t cater but we are event consultants on everything from table setting suggestions to wine and cocktail recommendations.

This website uses cookies to improve your experience. We'll assume you're ok with this, but you can opt-out if you wish. Accept Read More